The Lurking and Apparently Time-Traveling MacBook 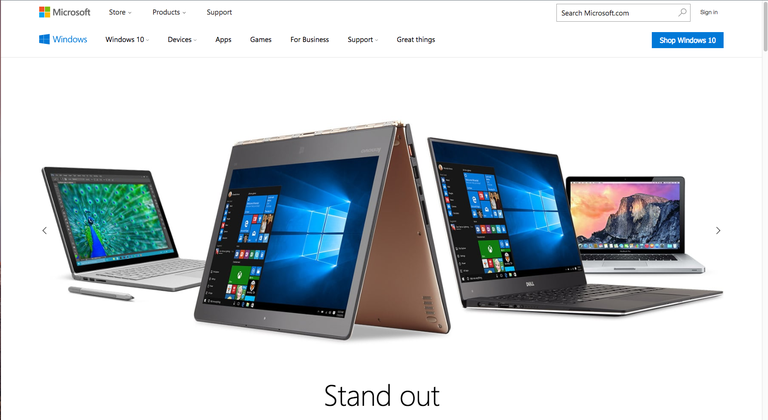 Yes, something certainly does stand out in the image above. If you still don't see it, I'm talking about the lone MacBook Pro lurking in the background of an image at the top of Microsoft's product page for Windows. No, Microsoft isn't selling MacBooks now. So why, then, has Microsoft decided to photobomb their own picture with an image of their direct competitor? Why give your competitors undue publicity?

They've positioned the MacBook Pro right next to their brand new Windows machines running Windows 10, the latest in their line of operating systems. Yet upon closer inspection, you'll notice they've used an older model of MacBook Pro, specifically a 2012 or earlier MacBook model running the two-generations-old Yosemite operating system. It's like that one 22-year-old kid that still hangs out at the high school.

When you scroll down, it becomes apparent that they've used the image deliberately to compare the new Windows machines to their Mac competitors. In that case, it's small wonder at all that they've used an image of an outdated model. How very, very clever of them.

The problem is it took me a minute to even figure out that they were comparing them at all. My first thought was, "Oh my. Someone at Microsoft has put up a picture of a MacBook by accident, and they are about to be fired."

It's often said that all publicity is good publicity, a philosophy with which I strongly agree. Here, Microsoft is giving Apple a free advertisement. Especially since they're deliberately showing their competitor in a bad light, and they've got a well-informed audience of people like me who are paying attention. They've only hurt themselves, and let's look at why.

If you click on their comparison article, you'll start to see more of what I mean by "bad light." When they actually compare specifications of MacBooks and several Windows machines, it's no longer the 2012 MacBooks they're using, but it isn't the newest MacBooks either (this is where it really started to grind my gears, rustle my jimmies, fluster my flapjacks). The specifications they cite for the 13" MacBook Pro are out of date, and since you can't even purchase that particular MacBook from Apple anymore, it's basically irrelevant.

Some of the information still remains true. For example, no MacBook released to date features a touchscreen, nor do they come with a digital inking pen. But they cite MacBook Pro's storage disk as 256GB PCIe-based flash storage, which of course has been upgraded from flash storage to a solid state disk (SSD) in the new MacBook Pro models.

The CPU is also incorrect, listed as the out-of-use 2.7GHz dual-core processor. The new midrange Pros actually come with a 2.9GHz dual core processor with Turbo Boost up to 3.3GHz. The higher tier MacBook Pro option has an even beefier processor than that.

Even the thickness of the machine is outdated, which Microsoft says is 0.71 inches, when it's actually 0.59 inches. This information isn't hiding. It's all available on Apple's website for anyone to see, and it takes perhaps three to five minutes to find.

Granted, it's easy for Microsoft to defend this misinformation. After all, I'm sure it's not their main priority to keep their competitor's specifications up to date. Especially if that would make their competitors look better. But I say, if they're going to compare themselves to their competitors in the first place, they should be comparing apples to apples instead of apples to oranges (or in this case, apples to old Apple computers). It's only fair.

Not only is the information misleading, it's just a misleading design choice to put an image of a product that isn't yours on your website. The way it's just sitting there next to three other windows computers lends itself to the idea that it's an equal, that it actually is comparable to their machines. It's almost like they are saying the MacBook Pro is a Microsoft product. A much better choice would have been to put one of their machines side by side with the MacBook Pro, almost like a poster for a boxing match.

I'm not an Apple spokesperson, but if you want to see some real specifications for the newest MacBook Pro or any other Apple product, I suggest you check out some of the following links: