This year's weather has been another for the history books...

This year's weather has been another for the history books and its. While climate change has been a topic of debate for several decades, extreme weather events are only now becoming the new norm. Across the United States, businesses and communities were impacted by extreme weather throughout 2019. The extensive damage they caused is an unsavory reminder of how natural disasters can seriously affect our everyday lives.

The National Oceanic and Atmospheric Administration (NOAA) has been tracking the total losses incurred from natural disasters since 1980, and their data shows a steady upward trend in natural disasters over the past 30 years which correlates with decreased global climate stability.

You can find the full report at www.ncdc.noaa.gov/billions

During 2018, the U.S. experienced an active year of billion-dollar disasters, resulting in roughly $91 billion in losses within the first  2 quarters alone.

Unfortunately, 2019 hasn’t shaped up to be any better.

According to NCEI records, in 2019 the continental U.S. experienced 6 weather and climate disaster events as of July 9th. Each of these events exceeded over $1 billion in losses and included 2 flooding events and 4 severe storm events. 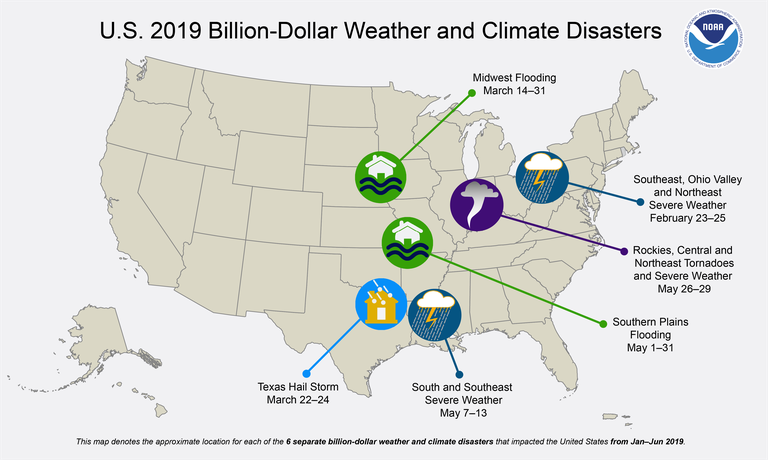 *Note that the above map only lists severe weather events that caused over 1 billion dollars in damage.

“As my own district in Missouri continues to recover from devastating flooding from earlier this year, now is the perfect time to remind everyone across the Nation that no community is completely immune to disaster of one kind or another.  Being prepared for floods, wildfires, earthquakes, tornadoes, hurricanes, or even acts of terrorism can save money, save property, and most importantly, save lives.”

Unfortunately, severe weather events have continued to stress and endanger citizens across the country. 2019 has been one of the most destructive years yet, bringing a range of weather events from severe thunderstorms and hailstorms, to bomb cyclones and derechos, tornado clusters and flooding, to a category 5 hurricane.

Filled with a continuous barrage of severe storms, the winter of 2018-2019 will be remembered as the wettest winter on record. Widespread outbreaks of intense cold along with storms hit areas across the country. December brought snowstorms to the southeast, uncommon for that area. January-February brought a polar vortex and several major winter storms to the Midwest and Northeast with historic snowstorms hitting the Southwest in late February. March began  with an outbreak of deadly tornadoes in the Southeast during which a total of 41 tornadoes touched down in a span of only 6 hours, spreading destruction across Alabama, Georgia, Florida, and South Carolina, causing widespread damage. At least 100 people were injured and 23 were killed, a death toll more than twice as high as the year before.

While the southern states dealt with these tornados, a massive bomb cyclone, or “nor-easter,” moved in over the country from the north, producing a variety of extreme weather events across the country including heavy blizzards, extreme thunderstorms, and severe hail. The water produced from snowmelt and rain following the cyclone resulted in destructive flooding across the midwest and southern plains states, submerging millions of acres of agricultural land and numerous cities and towns, damaging infrastructure such as roads, dams, and levies. The impacts from this flooding continued to extend throughout the year, disrupting barge traffic on the Mississippi River and drastically reducing the region’s agricultural output for the year.

April 2019 brought Winter Storm Wesley, a historic blizzard that occurred in the month of April in the Great Plains and the Midwest. April continued saturate the area with rain. The end of May into June brought a four day tornado-outbreak which produced 190 confirmed tornadoes along with damaging hail and straight-line thunderstorm winds across the Rockies, Central and Northeast.

The remainder of June brought warmer-than-average temperatures to the East, South and Northwest and cooler-than-average conditions to parts of the Western Plains and Midwest.

July brought the season's first hurricane, Barry, which formed in the northern Gulf of Mexico and struck Louisiana but caused little damage as only a category 1 storm. Following a heat wave in mid-July, derechos unexpectedly struck the upper midwest, bringing intense thunderstorms, large hail and damaging straight-line winds that caused a 485-mile long trail of destruction over just a 10-hour period. The damage extended from southeast Minnesota across the state of Wisconsin and into southern Michigan. Reported destruction included flattened crops, damage to vehicles and homes, road damage from flash flooding, large areas of downed trees and snapped power lines. Just over 272,000 customers were without power across Wisconsin and into southern Michigan according to an estimate from poweroutage.us.

A series of storms developed in late August, including Hurricane Dorian, the second hurricane and first major hurricane of the season, which is currently moving through the southwestern Atlantic. Dorian grazed the Windward Islands, the U.S. Virgin Islands and Puerto Rico before quickly strengthening into a Category 5 hurricane and settling over the Bahamas during Labor Day weekend. The Abaco Islands and Grand Bahama, the two worst hit locations in the Caribbean nation’s north with much of those parts submerged.